This page provides an introduction to the FY 2010 activities of a select number of group sites.

In FY 2010, JAE Hirosaki achieved all five of the environmental targets it set, i.e., measures against climate change (CO2 reduction), reducing raw material use, reducing chemical substances, lowering industrial waste, and promoting green procurement. In its reduction of chemical substances and industrial waste in particular, the company has stepped up its efforts, for instance revising its target figures upward to an 80% and 34% reduction, respectively, during the fiscal year. But this did not merely reduce waste. It also helped reduce raw materials and thereby greatly contributed to company profit. 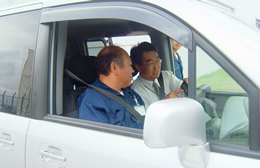 The company is also participating in the Cool Biz and Warm Biz programs, as well in the Lights Down and Let's Warm Up campaigns. It is also having Environmental Management Officers give addresses at the start of Environment Month in June and continuing activities that contribute locally, including cleanup efforts around the company, and other activities, such as workshops taught by outside instructors on eco-driving that employ vehicles fitted with fuel consumption gauges.

In FY 2011, the company will further enhance its ongoing activities and make an effort to contribute locally and to society, as well as teaching employees and their families about environmental awareness.

JAE Yamagata achieved all the environmental targets it had been pursuing. Of particular note was the reduction in the amount of power used by replacing air conditioning equipment with high-efficiency models. This was the result of the company's promotion of cuts in CO2 emissions from energy use as part of its measures against climate change. In winter, it did the opposite by directing the exhaust heat of production equipment into plants to supplement the heating system. This resulted in an 870-ton reduction in CO2 emissions.

As for waste reduction, the recycling area was renovated and waste sorting was exhaustively pursued so that each department could see the amount of waste they generated. This led to a reduction in the amount of waste. The company also started collecting Eco Caps and launched an initiative to support children around the world in need of vaccines.

●JAE Fuji, Ltd. (FAE)
In FY 2010, FAE sites only underwent internal audits within the JAE Group, and the company's ISO14001 renewal audit was only a written confirmation, rather than a direct audit. Corrective measures for the citations from the internal audit and horizontally deployed measures for the citations for JQA audits were all completed within the required time limit. In addition, there were no complaints from interested parties. FAE has achieved all the environmental targets it set, i.e., reducing CO2 emissions, reducing chemical substances, lowering industrial waste, and promoting green procurement. As for measures for reducing CO2 emissions, repairing aging plant facilities combined with work to make them more energy efficient (for example, heat-shielding coatings on plant roofs and energy-saving lighting) had a major effect. The company is also planning updates to its air-conditioning facilities along with energy saving measures, as part of its fight against climate change (CO2 reduction) in FY 2011.

Production suffered a dramatic downturn in the aftermath of the financial crisis that began in the fall of 2008, but it recovering gradually, and the input of energy, materials, and chemical substances, along with the output of waste, is returning to pre-downturn levels. Managing energy usage is thus a crucial issue for fighting climate change (reducing CO2 emissions). Further, since the 2011 Great East Japan Earthquake and Tsunami, societal demand is even higher now for conserving electricity as a way to deal with diminished power supplies. In response, SAE is further ramping up its energy-saving efforts. A specific example of measures taken is converting to inverters on plant equipment in order to conserve electricity. In FY 2010, power use was reduced by installing inverters on all three cooling water pumps at Plant 1, which had only been partially using inverters, resulting in an annual CO2 emissions reduction of 18 tons.

AE Taiwan has prioritized measures to conserve resources and save energy. It has been promoting the recovery and reuse of packaging materials as a way to conserve resources. To save energy, the company has been pursing efforts such as adding exhaust pipes for venting heat from molding machines and thereby control temperature increases. Among its efforts to protect the natural environment and teach about the environment, the company has been the conducting the Wang Gao Liao Lookout Point beautification movement on Mt. Dadu.

JAE Philippines' efforts were focused on saving energy and conserving water. To conserve water, the company further pursued the full-flush/half-flush conversion of toilets that it had been undertaking. It is also moving water supply lines above ground to make it easier to find leaks. To reduce energy usage for air condition, the company installed exhaust ducts that efficiently move hot air away from equipment. As part of its local community engagement, it helped clean up the Manila coastline and planted trees in a municipally operated sports park.

JAE Wuxi pursued measures to save energy and deal with hazardous materials. To save energy, the company is cutting the amount of power used for air conditioning and lighting. The amount of energy used is being cut by performing appropriate maintenance management and installing compressor control units to improve the energy efficiency of air conditioning. To maintain a pleasant environment around the plant, the grass is periodically cut and cleanup activities are carried out.

JAE Wujiang pursued measures to conserve recourse, save energy, and reduce waste. In particular, the company's energy conservation measures include rationalization of compressor operation, thorough management and efficiency improvements for lighting, adjustment of PC display brightness, and appropriate control of air-conditioning temperatures. These measures have allowed the company to cut the amount of energy it uses. In April each year, the company plants trees and crops around the plant to make the area more green and improve the natural surroundings.