Prevention of Soil and Groundwater Pollution

The discovery of soil and groundwater contaminated with hazardous substances is on the rise in Japan due to the redevelopment of former plant sites and voluntary surveys. Since countermeasures after contamination has already occurred take a vast amount of time and money, this is gaining recognition every year as a massive social problem, and related laws and regulations are being put in place.

In June 2011, the Water Pollution Control Act was amended to further strengthen regulations preventing groundwater pollution before it could occur. The requirements of businesses that handle harmful substances and facilities that cause contamination are becoming more stringent every year.

The JAE Group has been taking measures to prevent contamination by such means as double-walling underground storage facilities and pipes. Since fiscal 2010, the Group has been assessing the risk of leakage or permeation of the soil from facilities that hold toxic substances or that are related to fuel oil. Underground pipes for toxic substances or fuel oil that are judged to be at high risk were completely removed (positioned above ground) in fiscal 2014. By placing pipes related to toxic substances above ground, visual and other types of inspections became easier, and this also facilitates compliance with the revised Water Pollution Control Law. 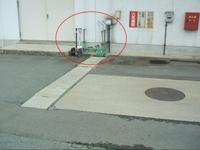 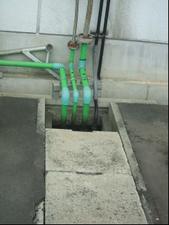 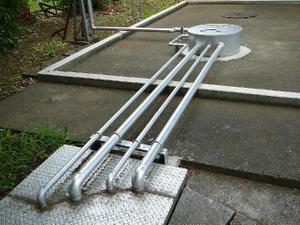 Starting in fiscal 2013, the Group has commenced inspections with regard to the aging and useful lifespan of environment-related equipment and is proceeding with analysis of the proper intervals between repairs. At Japan Aviation Electronics Industry, Ltd.'s Akishima Plant, critical valves on pipes running through designated facilities for harmful substance-storage tanks are regularly replaced at appropriate intervals in ongoing efforts to minimize the risk of leaks.

At JAE Hirosaki, Ltd. (HAE), together with upgrading equipment to clean emissions generated in the plating process, the wastewater cleaning process tower's retainer walls were given another coating. This represents planned protection in light of aging and deterioration, and by working to prevent air pollution and soil contamination before they occur, HAE is securing a higher level of safety and mitigating environmental risk.