The fight against climate change is a crucial global issue that requires the further involvement of each and every person and organization.
The JAE Group is working to address climate change through the teaching of environmental awareness, production-related measures, and measures at plant facilities, and it has set definite objectives and targets for its environmental activities.

Amount of CO2 emitted by the JAE Group in Japan

The total CO2 emissions of the JAE Group for fiscal 2016 amounted to 104,624 tons, an increase over the previous fiscal year.  The main factor behind the increase of greenhouse gas emissions in the past five years was higher production. The improvement in emissions per unit of net sales in fiscal 2016 was due to efficient production.
CO2 emissions volume by energy usage

*The equivalency factor for CO2 emissions due to energy use is the value published by the Federation of Electric Power Companies. In fiscal 2016, the fiscal 2015 result (0.531 tons-CO2/MWh) is being used.

The Akishima Plant has an obligation to cut greenhouse gas emissions by an average of 15% during the second phase of the plan from fiscal 2015 to fiscal 2019.

However, emissions in fiscal 2016 declined by about 11.2% from the baseline standard, and thus failed to reach a 15% reduction in a single fiscal year. The reason for the increase in greenhouse gas emissions was the expansion of production facilities, the operation of the Comprehensive Assessment and Testing Building, and other factors. We will keep working to do our part in the fight against climate change. 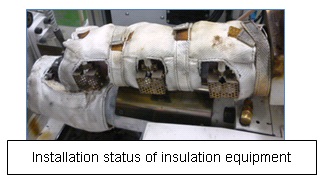 YAE has reduced power consumption by 111,500 kwh/year by using vacuum pumps, which have been in place for some time, and has reduced air consumption (340,000 kwh/year) by revamping the method for extracting products from the molding machine.

We reduced heater electricity consumption by 2,566 kwh per year by installing insulating material on the pipe and tank sections of the plating line. As a result, the air conditioning load caused by thermal loss from the equipment to the work area was reduced. 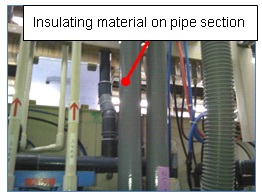 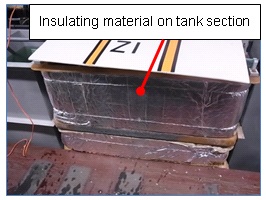 We upgraded to an air-cooled heat pump chiller (energy-saving device) due to facility upgrade (conventional turbo refrigeration unit and boiler) and attempted to save space in the turbo refrigeration unit cooling tower area and air conditioning machine room.  As a result, the amount of supplementary water (about 1,700 m3/year before) for the cooling tower required thus far, was zero. 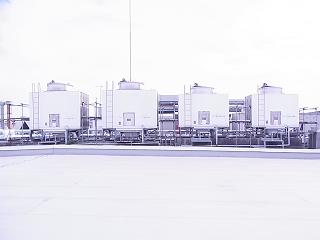 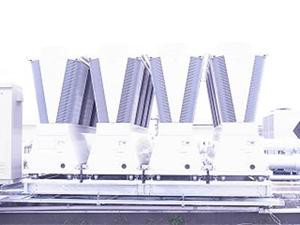 ●    Switching from mercury lighting to LED lighting (within the Akishima Plant)

In addition to saving energy, preparing for the 2020 discontinuation of the manufacture of specified mercury-added products, out of the total 115 lighting units at Akishima Plant, 43 units were upgraded between fiscal 2014 and 2016 and electricity consumption was reduced by 40,800 kwh. The remaining 72 units are scheduled to be systematically upgraded by fiscal 2019. 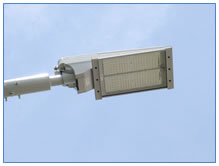 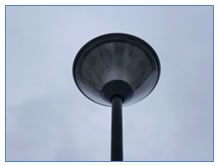 We upgraded two substation transformers to top runner transformers and reduced consumption by 11,380 kwh per year.

Reduced by 72,000 kwh per year by removing unnecessary substations.

We reduced consumption by about 92,244 kwh per year by adjusting operation mode (switching between temperature control and ventilation) while monitoring the cleanliness, temperature, and humidity of air conditioners in the No. 3 Plant’s lab.

We reduced electricity consumption at the FAE Plant by changing the lighting of the machine tool area, where operation times are long, to LED lighting and reduced consumption by 14,900 kwh/year on an annual cumulative basis.

Activities to increase awareness of measures to fight global warming